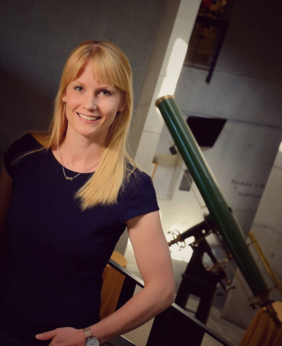 A new Emmy Noether Research Group at the Zentrum für Astronomie der Universität Heidelberg (ZAH) (Centre for Astronomy of Heidelberg University) started working on understanding how galaxies form and evolve and what physical processes are most important at different cosmic epochs and spatial scales. The new research team GALENA (Galaxy Evolution and AGN) is led by Dr Dominika Wylezalek and will especially focus on the role of actively accreting supermassive black holes (active galactic nuclei: AGN) in galaxy evolution. The German Research Foundation (DFG) has allocated 1.6 million Euros to fund the group over a period of six years. The group will also be supported by a grant from the Daimler and Benz Stiftung (40,000 EUR). Dr. Wylezaleks group will be located at ZAH’s Astronomisches Rechen-Institut (ARI).

“Physically very small objects, supermassive black holes seem to have an enormous impact on the evolution of galaxies and eventually on the way our universe looks today,” says Dominika Wylezalek. The group will be primarily utilising the power of optical and IR integral field unit observations (SDSS-MaNGA, MUSE/VLT, GMOS/Gemini, NIRSpec+MIRI/JWST) and sub-mm observations (ALMA, ARO). The group will e.g. try to find concrete evidence for black hole/galaxy self-regulation and determine the power, reach and impact of feedback processes exerted by AGN.

Dominika Wylezalek obtained her Bachelor degree at the University of Heidelberg in 2010 and her Master in Astronomy in 2011 at the University of Cambridge (UK). After finishing her PhD in 2014 at ESO/University of Munich she worked as postdoctoral researcher at Johns Hopkins University (US) and as a research fellow at the European Southern Observatory (ESO) before she now moved back to Heidelberg. At ESO, she has been heavily involved in the commissioning of the adaptive-optics assisted narrow-field mode of the MUSE instrument. She is also the PI of the JWST Early Release Science Program “Q3D — Quasars in 3D”. Her new group members Wuji Wang and Caroline Bertemes will start their positions in the next few months.

The Emmy Noether Programme gives exceptionally qualified early career researchers the chance to qualify for the post of professor at a university by leading an independent junior research group for a period of six years. Dominika Wylezalek is the second female Emmy Noether Research Group leader at the Centre for Astronomy of Heidelberg University.