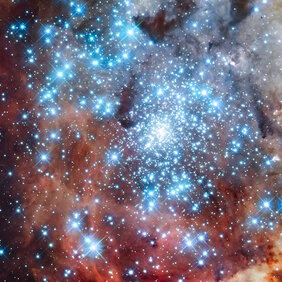 The massive star cluster NGC 2070, located in the 30 Doradus region of the Large Magellanic Cloud, harbours a subcluster of younger stars in its center. (Image: HST/NASA)

Star clusters interact with the interstellar medium in various ways, i.e. by destroying molecular star-forming clouds, resulting in inefficient star formation on galactic scales. On cloud scales, ionizing radiation creates ionized hydrogen regions, while stellar winds and supernovae drive the interstellar medium into thin shells. These shells are accelerated by the combined effect of winds, radiation pressure, and supernova-explosions but slowed down by gravity. Since radiative and mechanical feedback is highly interconnected, they must be taken into account in a self-consistent and combined manner, including the coupling of radiation and matter. Daniel Rahner, Phd-student at the Institut für Theoretische Astrophysik (ITA) at the Zentrum für Astronomie der Universität Heidelberg (ZAH) has together with his collaborators developed a new semi-analytic one-dimensional feedback model for isolated massive clouds to calculate shell dynamics and shell structure simultaneously. It allows to scan a large range of physical parameters (gas density, star formation efficiency, and metallicity) and to estimate escape fractions of ionizing radiation, the minimum star formation efficiency required to drive an outflow, and recollapse time-scales for clouds that are not destroyed by feedback.

It is the first time that such a comprehensive model has been discussed in the literature. All previous studies have neglected one or several of the important feedback processes and coupling mechanisms between radiation and cloud material. The new results demonstrate that there is no simple answer to the question of what feedback process dominates cloud dynamics, and that each one significantly influences the efficiency of the others. Rahner and his colleagues find that variations in natal cloud density can very easily explain differences between dense-bound and diffuse-open star clusters. They predict, as a consequence of feedback, an age difference of a few million years for massive clusters with multiple generations. This is exactly what is observed in the Large Magellanic Cloud in the extended cluster NGC 2070 with the younger dense cluster R136 found in its center.

In the comming weeks they will extend the parameter range in order to study the evolution of very high-mass star-forming clumps in violently disk-unstable galaxies at the peak of the star formation rate at redshifts around z = 2. This will help to better understand the evolution of our own Milky Way during these exciting times of cosmic evolution.

This work is part of Subproject B2 of the SFB 881.