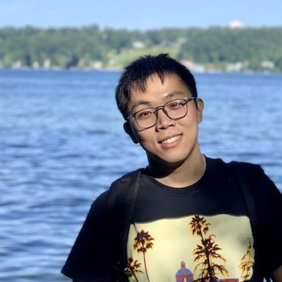 PhD researcher Wuji Wang emphasizes that a good working relation is an important part to be thought about for PhD students. (Image credit: Wuji Wang) 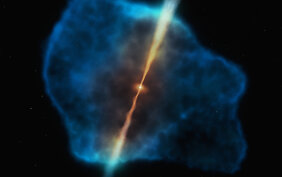 This artistic illustration depicts a gas halo surrounding a quasar in the early Universe. The quasar, in orange, has two powerful jets and a supermassive black hole at its centre, which is surrounded by a dusty disc. The gas halo of glowing hydrogen gas is represented in blue. Phd researcher Wuji Wang will study such objects with the help of JWST outstanding infrared observing capabilities. (Credit: ESO/M. Kornmesser)

The James Webb Space Telescope (JWST) will be the largest, most powerful and complex space telescope ever built and launched into space. It is an orbiting infrared observatory that will complement and extend the discoveries of the Hubble Space Telescope, with longer wavelength coverage and greatly improved sensitivity. The longer wavelengths enable JWST to look much closer to the beginning of time and to hunt for the unobserved formation of the first galaxies. Its launch is planned for October 31, 2021.

Designed to observe the universe in the near infrared, JWST is ideally suited to support Wuji Wang’s doctoral research project under supervision of Dr. Dominika Wylezalek, Emmy Noether Junior Research Group leader at the Center for Astronomy of Heidelberg University (ZAH). Mr. Wang’s research proposal to use JWST for his research was rated so well that he was granted observation time at the JWST. In fact, in a very competitive selection process his proposal was one of only 25 student-led observation requests from all over the world that were granted observing time during JWST’s first operation phase.

Wang is interested in the topics of galaxy evolution and supermassive black holes with masses on the order of millions or billions of times the mass of the Sun and which i.a. reside in the cores of distant galaxies. In his thesis, Wang will determine the impact of such objects on their host galaxies when the Universe was young through studying the high-redshift radio galaxies who gathered most of their stellar mass by then, typically over 100 billion solar masses. But his objects of interest are distant and interesting optical features are shifted to the near infrared due to the expansion of the Universe. But due to earth’s atmosphere effectively absorbing infrared radiation, respective observations are only possible with space-based telescopes like JWST.

Wuji Wang grew up in Beijing. He did his Bachelor in Astronomy at Nanjing University, China 2013-2017 and his Master in Astrophysics at Ludwig Maximilian University (Munich) 2018-2020. In the same year he started his thesis at the Center for Astronomy (ZAH) in Dr. Wylezalek’s research group established at the Astronomisches Rechen-Institut, which is part of the ZAH. Her group offers him additional opportunity to use the state-of-the-art telescopes to study the feedback of supermassive black holes and their host galaxies.

Dr. Wylezalek is also leading a JWST early science program and combined with Mr. Wang’s newly approved program, the group is building up valuable expertise for this world-class observatory in Heidelberg. “I have worked with Dr. Wylezalek and others already for a long time and thereby established a good working relation which is an important part to be thought about for PhD students” the young researcher resumes the working atmosphere despite corona related restrictions of working together in presence.

We keep our fingers crossed that the start of the JWST in October will take place as planned and that the telescope will soon give us fascinating new insights into our universe.