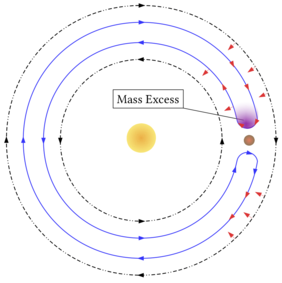 Cartoon showing how the wind-driven inward motion of the gas through the co-orbital region of the protoplanetary disk leads to a strongly asymmetric mass distribution, with a mass excess in front of the planet, and a mass deficit trailing the planet. (© Kimmig/Dullemond/Kley)

In their early phase of formation planets can migrate to different radial locations due to their gravitational interaction with their protoplanetary disks. Orbital elements of observed exoplanets may therefore not reflect the location where they were originally born. The accretion of matter towards the central star is accounted to be one origin of such a gravitational interaction.

Carolin Kimmig, Bachelor student at the Institute for Theoretical Astrophysics (ITA) at the Center for Astronomy of Heidelberg University (ZAH), now compared the efficiency of the wind-driven accretion process with respect to the viscous accretion process in protoplanetary disks. In both cases matter gets rid of momentum enabling its slow propagation towards the central star. Her analysis is based on the fact that for the co-orbital region within the gap in which a planet orbits its star, the wind-driven process always injects mass from the outer edge of the co-orbital region and removes mass from the inner edge, while the viscous process does not.

Wind-driven accretion is probably driven by magnetocentrifugal wind loss, i.e. outflowing gas from the disk that is centrifugally accelerated along magnetic field lines which in turn take away momentum of the disk matter leading to an inward motion of the gas.

If this radial inward motion is then rapid enough to enter the “horseshoe streamlines” this leads to a strong asymmetry in the horseshoe region. When gas enters the co-rotation region in front of the planet, it performs a horseshoe orbit and moves towards the planet. At the U-turn point of the horseshoe orbit an excess of mass occurs. While the gas turns its direction at this point, it moves closer to the star and loses angular momentum which is transferred to the planet.

On the other hand, behind the planet a defect of mass occurs, because the horseshoe orbit transports the gas away from the planet. Gas that performed the U-turn in front of the planet now finds itself close to the inner edge of the gap. Due to the rapid inward motion caused by the wind, this gas then quickly leaves the co-orbital region again by entering the inner disk and will not librate all the way to the back side of the planet, leaving this region devoid of gas. The region in front of the planet is now steadily populated with gas, the planet only gains angular momentum and thus migrates outward.

Kimmig shows that lower mass planets more easily migrate outward which might be a possible origin of the intermediate mass planets at large radii that are thought to be the cause of the multi-ringed disks observed in protoplanetary disks by the Atacama Large Millimeter Array (ALMA).