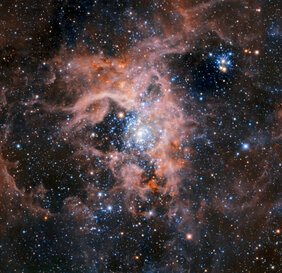 This image shows the dramatic star formation region 30 Doradus in the Large Magellanic Cloud, a satellite galaxy of the Milky Way. Intense radiation emerging from massive stars in its core results in glowing gas behind intersecting lines of interstellar dust. The 30 Doradus complex has undergone multiple phases of star formation. (Credit: ESO) 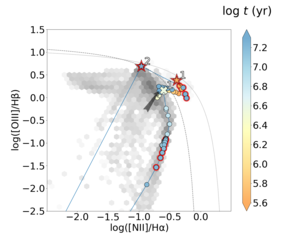 This graph shows, how the relative intensities of different emission lines observed from a star forming cloud rapidly vary as function of time. Each dot represents the situation at a different time after cluster formation. The evolutionary timescale shown on this diagram ranges from 10^5.6 to 10^7.2 years. Dots with red circles mark parameters which are not observable by current astronomical instruments. (Credit: E. Pellegrini et al.)

Stars of multiple times the mass of the sun play a central role in the evolution of the interstellar medium (ISM) and the self-regulation of star formation. “Feedback” from these massive stars in the form of strong stellar winds, radiation, and supernova explosions are among the main processes that regulate star formation on scales of individual molecular clouds. However, what we commonly observe as “star-formation” is reprocessed radiation of massive stars emerging as nebular and molecular lines as well as dust emission. At the same time, the underlying astrophysical mechanisms are of overwhelming complexity and interdependency. Correctly interpreting the information provided by these various types of observations is on the other hand of central importance to our understanding of star formation.

There are many numerical attempts available that make predictions of radiation fields emerging from star formation complexes. One would ideally use high-resolution 3D simulations as a basis for making these observational predictions. However, such models that include all of the relevant physics (photoionization, photodissociation, radiation pressure, winds and outflows, supernovae, gravity, radiation pressure) are computationally limited and do not allow to explore a large parameter space. As a kind of work-around, many models explore a static parameter space and do not account for e.g. the growth of an ionized hydrogen cloud, a so called “HII region”, or change in the embedded star cluster population due to aging or consecutive star formation phases.

To compensate these weaknesses, a group of researchers lead by Dr. Eric Pellegrini from the Institute of Theoretical Astrophysics (ITA) of the Zentrum für Astronomie der Universität Heidelberg (ZAH) has now presented the “WARPFIELD -Emission Predictor” (WARPFIELD-EMP), a computation framework, which merges several established codes designed to solve for isolated physical processes, with the dynamical evolution of a star formation region (WARPFIELD, CLOUDY, POLARIS). The code solves the equations of motion for a 1D spherical shell of gas evolving under the influence of stellar winds, supernova energy injection, radiation pressure and gravity, incorporates non-local thermodynamic equilibrium spectral synthesis and plasma simulations, and accounts for the impact of dust extinction. Moreover, the approach includes star cluster evolution and multiple bursts of star formation following respective re-collapses of the natal cloud.

With their method of modeling individual clouds from first principles, Dr. Pellegrini and his colleagues where able to avoid long-standing degeneracies in the interpretation of HII region diagnostics and to relate the observational measures to important physical parameters such as cloud mass or cluster age in a fully self-consistent way.

Amongst others, they were able to show that there is a causal relationship between the feedback and cluster/cloud evolution which determines the ionizing radiation spectrum, the pressure of the interstellar medium or the cloud structure. In massive clouds and high pressure regions, collapsing objects are often unobservable at optical wavelengths owing to their high extinctions. Clouds with low star formation efficiencies may undergo multiple bursts of star formation. And if the star formation efficiency is too low, feedback from the

star cluster may be unable to unbind the cloud, which will eventually re-collapse and form new stars. This implies that some clusters will contain stellar populations with ages separated by 1-10 Million years like 30 Doradus in the Large Magellanic Cloud.

Eric Pellegrini and his colleagues have already started to apply WARPFIELD-EMP to reproduce Line emission features measure e.g. for the Milky Way or the galaxy NGC 628 and find very good agreement.