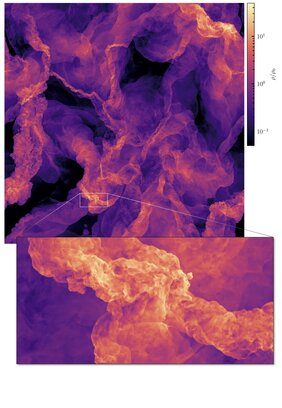 The figure shows a section through the cube of the turbulence simulation. The colors show the density contrast relative to the mean density of the gas. Its turbulent structure is clearly recognizable. In particular, the numerous shock fronts emerge, recognizable by the sharp changes in density from high density (light orange) to low density (dark purple). This is particularly clear in the enlarged section. (Source: C. Federrath) 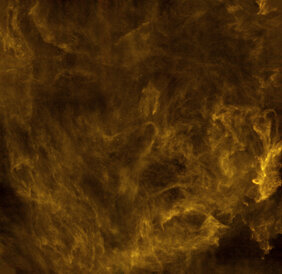 The area shown on this image is known as the Polaris Flare, a region of dust and gas in the constellation of Ursa Minor, 490 light-years from Earth. It was taken by ESA’s Herschel infrared space observatory and displayed as a colour composite. It shows several tangled interstellar filaments, which stretch for tens of light-years through space. Embedded within the filaments are denser patches of material, which in the future might become stars. Federrath and is colleagues compared the properties of these filaments and those in other molecular cloud regions to their simulations and found very good agreement. (Source: ESA and the SPIRE & PACS consortia, Ph. André (CEA Saclay) for the Gould’s Belt Survey Key Programme Consortium, and A. Abergel (IAS Orsay) for the Evolution of Interstellar Dust Key Programme Consortium)

A team of astrophysicists led by Christoph Federrath from the Australian National University (ANU) and Ralf Klessen from the Center for Astronomy of Heidelberg University (ZAH) have carried out the highest-resolution simulations to date on turbulence in interstellar gas and molecular clouds. The results of the calculations carried out at the Leibniz Supercomputing Center in Garching (LRZ) allow for the first time to draw conclusions about the important transition from turbulence in the supersonic and subsonic range. The results are a milestone in our understanding of star formation.

Numerous scientists around the world are dealing with one of the central and most complex questions in astronomy: when and how do which types of stars form from interstellar gas clouds. The answer to this question has far-reaching consequences for our understanding of cosmic evolution and eventually of the formation of life-friendly planets like Earth. Interstellar gas, which makes up about 10-15% of the mass of all stars in the Miky Way, does not uniformly penetrate the space between the stars, but in its distribution rather resembles rising and turbulent swirling smoke. And it is precisely this turbulent behavior that is the key to understand how interstellar gas clouds fragment and what size and mass these fragments have, which later cluster together to form stars and star clusters.

At the Institute for Theoretical Astrophysics (ITA) at the Center for Astronomy of the University of Heidelberg (ZAH), the research group around Prof. Dr. Ralf Klessen has been studying the turbulent properties of interstellar gas clouds for many years. A particular challenge is the tendency for turbulent movements to cascade from large scales to smaller and smaller scales, similar to billows of smoke with their large, rapidly moving eddies and the slower and smaller eddies that are carried along with them. This cascading process, though more complex, also takes place in interstellar gas, dust and molecular clouds, also called interstellar medium. However, the interstellar medium is many orders of magnitude more tenuous than a smoke plume. Typically, there are one to one hundred gas particles in one cubic centimeter of interstellar space, compared to the 1019 molecules that are found in the same volume of air. In this cascade the turbulent energy decreases to a smaller scale, and in connection with the low viscosity and the very low density this means that large areas of turbulence, mostly moving at supersonic speed, will eventually move at subsonic speed. And it is precisely this transition scale - the sonic scale - that determines the size of dense molecular cloud cores from which stars could form and marks the transition from turbulence-dominated to gravity-dominated clouds, so-called "dense cores", which can collapse to form stars under the influence of their own gravitational weight.

There are theoretical predictions as to where this area should be. But the exact location, shape and width of this transition zone was previously unknown. But there is a reason. “The physical processes are so tremendously complex that their interplay can only be studied with the help of computer simulations” resumes Prof. Klessen. Under direction of Prof. Federrath the international team of scientists used the resources of the Leibniz Supercomputing Center (LRZ) in Garching to carry out the largest simulation of interstellar turbulence to date to investigate the previously numerically hardly accessible transition from supersonic to subsonic turbulence. The research team now published its results in Nature Astronomy.

In order to precisely simulate the turbulent processes, Federrath and his colleagues had to take into account, among other things, the turbulent dynamics on both sides of the sound scale in the complex, gaseous mixture of the interstellar medium and to record phenomena that occur faster than the speed of sound, as well as the simulation at the same time to run slowly and in detail exactly where smaller and less dynamic processes take place. "For our special simulation, in which we want to follow both the supersonic and subsonic turbulence cascades with the sonic scale in between, we have to resolve at least four orders of magnitude in spatial extent." Federrath explains one of the special challenges.

In order to precisely simulate the supersonic and subsonic scale as well as the transition area, the team worked with the Leibniz Supercomputing Center to scale its application to more than 65,000 cores on the "SuperMUC". Because so many cores were available, the simulation was able to deal with more than 1 trillion spatial resolution elements.

The results of the most complex simulations of their kind to date are spectacular. They could not only confirm the theoretically predicted position of the sound scale but also determine the width and shape of the transition zone from the supersonic to the subsonic regime. The transition is not sharp but occurs over a wide range of scale. "Theoretically, this transition zone defines the frequency with which dense nuclei can be found in interstellar gas clouds," explains Prof. Klessen. "We have therefore compared our predictions with observations of the gas cloud IC5146 in the Milky Way and obtained very good agreement. This is an encouraging result," adds the astrophysicist to one of the numerous research results.

From the point of view of the scientists, the simulations will be able to provide quantitative information for future turbulence-regulated models of the filament structure and star formation in molecular clouds.