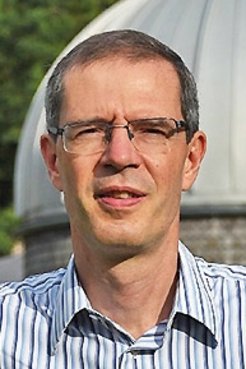 H.E.S.S. stands for High Energy Stereoscopic System. It is a new system of Imaging Atmospheric Cherenkov Telescopes for the investigation of cosmic gamma rays in the 100 GeV energy range. The H.E.S.S. experiment is operated by 20 institutions, mostly based in Germany and France.

The Landessternwarte (LSW) had participated in the project from the beginning. A very specific contribution to the experiment is a monitoring telescope to search for flares in variable gamma-ray sources to enable prompt reaction by the whole gamma-ray telescope array.

The H.E.S.S. experiment is located in Namibia and started originally with four 12m-sized telescopes in 2004 for an anticipated lifetime of 15 years. Due to the enormous success the experiment was upgraded with a large 28m telescope, currently the largest light-collecting telescope in the world. The facility, which continues to be the most productive of its kind, has recently been granted an extension by the operating partners and the Namibian hosts.