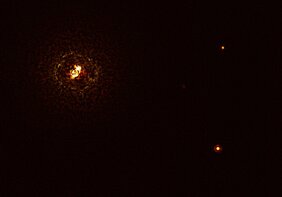 This image shows the massive binary star, b Centauri, with its planet. The pair of stars, whose total mass is at least six times the mass of the Sun, is the bright object in the upper left corner of the image, the light and dark circles around it are optical artifacts. The planet, visible as a bright dot at the bottom right of the image (indicated by the arrow), is ten times as massive as Jupiter and orbits the pair at a distance of 100 times that Jupiter orbits the Sun. The other bright dot in the image (top right) is a background star. By taking different images at different times, astronomers were able to distinguish the planet from the background stars. The image was taken with the SPHERE instrument on ESO's Very Large Telescope, a Coronagraph, which blocked the light from the massive star system, making it possible to detect the faint planet. (Source: ESO/Janson et al.)

In an orbit around the binary star system b Centauri, a planet was discovered, ten times more massive than Jupiter. The fact that it exists despite the extremely high-energy radiation field of its two parent stars is a nice surprise for Dr. Sabine Reffert from the Königstuhl State Observatory (Landessternwarte). She is one of the scientists who are involved in the observations and their evaluation.

The star system b Centauri is located at a distance of 325 light years in the constellation Centaurus. At its center orbit two stars, which together have six to ten times the mass of the Sun. "The fact that a planet was found in an orbit around such a massive binary star system at all was a nice surprise for all of us," Reffert comments on the research results. Dr. Reffert is an astronomer at the Königstuhl State Observatory, which is part of the Center for Astronomy at Heidelberg University (ZAH), and an expert in the search for planets around massive stars. "Until now, planets have only been found in stars with masses up to three times the mass of the Sun. Whether planets could exist around more massive stars had not been known, although there were hints from slightly lower-mass stars that it could be worthwhile to look for planets on very wide orbits," she adds.

One of the reasons is the enormous amount of heat and high-energy radiation that massive stars emit. This should severely hinder the formation of planets, because the material from which planets can form is actually evaporated far too quickly. The fact that a planet has now been found can be explained if it has formed, for example in another planetary system in a less destructive environment and has been captured by a dynamic interaction of b Centauri where it reached its current orbit.

The new planet called "b Centauri b" is also an extreme object on its own, because with 10 times the mass of Jupiter, it is one of the most massive planets ever discovered. It also orbits its binary star at a distance that corresponds to a hundred times the distance of Jupiter from the Sun. This could also be the reason why this planet has been able to survive so far.

The new observations were made possible with SPHERE, the "Spectro-Polarimetric High-contrast Exoplanet REsearch instrument", which was installed by the European Southern Observatory (ESO) on one of the four large telescopes that together form the Very Large Telescope (VLT) in the Chilean Andes. As a special measuring instrument, SPHERE is able to block out glaringly bright stars to make visible the light of the million times fainter shining planets, which would otherwise be outshone by the starlight.

With the help of the next generation of powerful telescopes such as ESO's Extremely Large Telescope, which is expected to go into operation at the end of the decade, even more detailed investigations will be possible and the origin of the giant planet might be revealed, which does not seem possible at the moment.