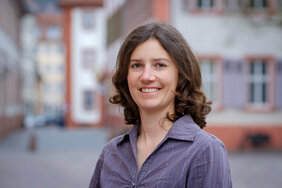 The matter cycle, which is fundamental to the development of galaxies, is the focus of a new Emmy Noether junior research group that has started work at the Center for Astronomy of Heidelberg University. The researcher team, under the leadership of Dr Mélanie Chevance, aims, in particular, to quantify how matter flows within galaxies, how gas is converted into stars and how stars eject the material again into the surrounding medium. The German Research Foundation (DFG) has allocated 1.7 million euros to fund the group over a period of six years.

Dr Chevance explains that galaxies are in constant evolution, under the influence of the so called matter cycle. The Heidelberg astrophysicist says, “Gas clouds assemble and collapse. Stars form within them, redistributing matter and energy back into the surrounding medium through feedback and turbulence.” The physical processes that drive this cycle take place on the small scale of molecular clouds, but govern the evolution of entire galaxies. In turn, the large-scale development of galaxies impacts directly on this environment in which stars form. “The matter cycle represents a kind of engine that drives the development of galaxies. However, how it proceeds in detail is still not known,” Dr Chevance underlines. The investigations of the new Emmy Noether junior research group combine astronomical observations with numerical modelling and aim to improve computer-supported galaxy simulations. For example, they also want to calculate how fast material flows through each of the phases of this cycle.

Mélanie Chevance received her Master’s degree in astronomy and astrophysics in 2013 from the Pierre and Marie Curie University and the Paris Observatory (France). In 2016 she obtained a PhD at the Paris Diderot University and the research centre of the French Alternative Energies and Atomic Energy Commission (CEA) in Saclay. Since May 2022 she has carried out her research at the Institute of Theoretical Astrophysics, which belongs to the Center for Astronomy of Heidelberg University.

The Emmy Noether Programme of the German Research Foundation offers exceptionally qualified early-career researchers the chance to qualify for the post of university professor by leading an independent junior research group for a period of six years.