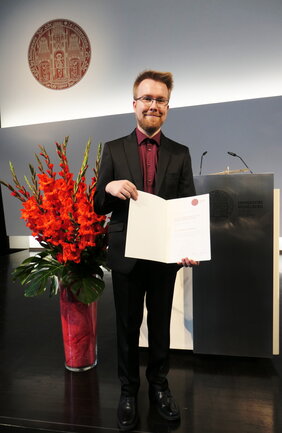 Dr Andreas Sander with the award certificate presented at the University's annual celebration on October 22.

Each year the Klaus-Georg and Sigrid Hengstberger Award enables up to three young scientists at Heidelberg University to organize their own dedicated symposium. This year, Dr Andreas Sander, Emmy Noether Junior Research Group Leader at the Astronomisches Rechen-Institut (ARI) of the Center for Astronomy of Heidelberg University, is one of the awardees. The award has a value of 12.500 Euro and will support the organization of a scientific symposium at the Heidelberg International Science Forum (IWH) about the yields of massive stars and their impact on the chemical evolution of galaxies.

Dr Sander employs novel computational methods to explore the role of massive stars in the evolution of the Universe. Owing to their high luminosity, massive stars dominate their surrounding with their strong stellar winds and ionizing radiation. The scientific efforts of his research group revolve around the quantification and theoretical understanding of this impact by applying and developing expanding stellar atmosphere models. A key ingredient in the role of massive stars as fundamental engines of the cosmic matter cycle are their strong, radiation-driven winds, which e.g. need to be accounted for in the quantitative spectral analysis and simulation of these objects.

In his symposium, Dr Sander and his group will investigate the broadercontext of stellar yields from massive stars by combining their research insights on stellar winds with complementary expertise from other related astrophysical disciplines, e.g. stellar evolution modelling and supernovae explosions. A particular aim of the symposium, which will take place in September 4-8, 2023, is to pave the way for a more realistic understanding and quantification of the origin of our elements.

Andreas Sander earned his diploma in physics in 2010 at the University of Potsdam where he also obtained his doctorate in the field of astrophysics in 2016. As a postdoctoral researcher he laid the basis for a new generation of stellar atmosphere models and expanded his expertise on the theoretical foundations of stellar winds. After holding an independent fellowship at Armagh Observatory in the UK, he started his Emmy Noether research group in August 2021 at the ARI in Heidelberg.