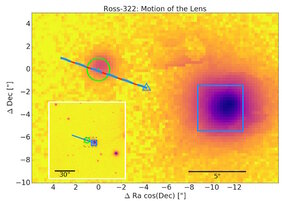 Image from the PAN-STARRS Telescope at Haiwaii with the foreground star Ross 322 (Blue square) and the background star (green circle) which will be traversed by Ross 322 in the next month. In Summer 2015 Ross was at the position of the blue triange measured by Gaia. Since then it moves along the blue line and is currently close to the position of the background star. (Source: Jonas Klueter)

When Ross 322 will pass the background star its motion (green line) will be affected by gravitational lensing. The characteristic motion is shown as a blue line. The largest shift is expected in early August 2018. (Source Jonas Klueter)

Using data from Gaia astrometry satellite, astronomers at Heidelberg University investigated the movement of millions of stars in the Milky Way galaxy. For the first time, they were able to predict the approach of two stars with extreme precision and to forecast characteristic effects of relativistic light deflection that can be used to precisely measure the mass of stars. The findings were published in the journal “Astronomy & Astrophysics Letters”.

“The stars in the Milky Way don’t stand still, but move relative to one another like gnats in a swarm. As seen from Earth, a foreground star occasionally passes close to a background star. Light travelling towards us from the background star is shifted ever so slightly by the gravitational field of the foreground star as it passes,” explains Prof. Dr Joachim Wambsganß, Director at the Institute of Astronomical Computing at Heidelberg University's Centre for Astronomy (ZAH). This “astrometrical gravitational lensing” changes the position of the background star in the heavens by a very small but still measurable amount. This shift plus the relative position of the two approaching stars can be used to derive the mass of the foreground star.

“This method of measuring mass is precise to within a few percentage points. Until now, however, it has been very difficult to predict when and which star pairs would pass close enough to one another to support such measurements, because the stars' precise ‘proper’ motion in the sky must be known,” emphasises Prof. Wambsganß. The Gaia astrometry satellite has been measuring the position and the proper motion of approximately 1.5 billion stars for about four years, and its recently released data are of sufficient precision. The extensive dataset was published in April of this year.

Jonas Klüter, a doctoral student working with Prof. Wambsganß, combed through this vast data volume for the best star-crossings observable within the next 50 years, the period that can support reliable predictions using Gaia. The exhaustive analysis identified nearly 70.000 candidates, although not all are expected to produce a measurable shift. The researchers were able to predict a currently measurable effect for two stars currently located near a background star.

They are known as Luyten 143-23 and Ross 322 in the star catalogue and move across the celestial sphere at a speed of 1,600 and 1,400 milliarcseconds (mas), respectively. According to Jonas Klüter, one of the stars passed closest to the background star in early July this year; the other will do so in early August. Gravitational lensing shifts the position of the background stars by 1.7 and 0.8 mas, respectively.

Only the best telescopes can measure this change from Earth. Jonas Klüter is therefore conducting an observational campaign using, among others, the telescopes of the European Southern Observatory (ESO) in Chile. Aided by the telescopes, he will track the approaching star pairs and measure the positional shift to identify for the first time the mass of two stars by means of gravitational lensing.