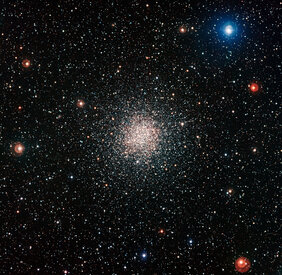 Picture of the NGC 6362 globular star cluster, taken with a 2.2 m telescope at the European Southern Observatory atop the Cerro La Silla in Chile. The formation and properties of these special objects were described in the framework of the E-MOSAICS simulations. (Source: ESO) 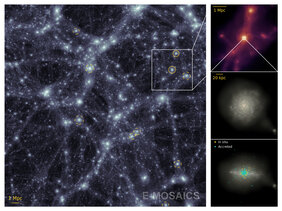 Luminous bands and patches show the distribution of dark matter, whose existence has only been detected indirectly although it is essential for the condensation of galaxies like the Milky Way. Such "simulated Milky Ways" are located in the yellow circles. The two lower panels in the enlarged detail show how these reconstructed galaxies would appear to the observer. The blue and yellow dots mark the globular clusters that either formed with the galaxy (yellow – in situ) or were captured from the surrounding environment (blue – accreted). (Source : J. Pfeffer, J.M.D. Kruijssen, R.A. Crain, N. Bastian)

Detail from the E-MOSAICS simulations that shows the formation and concentration of globular clusters over a period of approximately 13 billion years. The first clusters (coloured dots) form just a few hundred million years after the Big Bang. Over time, more and more clusters join and ultimately concentrate around a large galaxy, resembling those around the Milky Way. (Source : J. Pfeffer, J.M.D. Kruijssen, R.A. Crain, N. Bastian)

The globular clusters that surround our Milky Way are nearly as old as the universe itself. Computer simulations conducted by a team led by Dr Joel Pfeffer of Liverpool John Moores University (United Kingdom) and Dr Diederik Kruijssen of Heidelberg University now suggest that these ancient star clusters were formed via the same mechanisms as our home galaxy's new-born stars, which makes them natural relics of star formation in the early universe. According to the two researchers, "this approach elegantly solves one of the greatest mysteries in astronomy". Galaxies like our Milky Way are surrounded by a system of hundreds of globular clusters. But the question of how they formed has long been a challenge in astrophysics. The researchers from Liverpool and Heidelberg have now presented new simulations to solve this question. They combined current models of globular cluster formation with a state-of-the-art EAGLE simulation of galaxy formation. The project, entitled "Modelling Star cluster population Assembly In Cosmological Simulations within EAGLE", or E-MOSAICS for short, reveals how the changing conditions within galaxies over 13 billion years influence the formation and evolution of their star clusters. In the new study, the researchers started from the idea that globular clusters formed in the same way as the new-born star clusters emerging from gas-rich regions of nearby galaxies today. For the first time, E-MOSAICS enabled them to test this assumption on an observed population of globular clusters in the Milky Way. "The simulations show that the first star clusters form just a few hundred million years after the Big Bang. In the billions of years that follow, they are joined by other globular clusters and ultimately concentrate around a large galaxy, arranged much like those around the Milky Way," explains Dr Kruijssen, research group leader at the Institute of Astronomical Computing at the Heidelberg University Centre for Astronomy (ZAH). Until now, it took some unusual assumptions to explain the origin of globular clusters. But in the current simulations, the explanation unfolds completely naturally through the application of familiar star formation physics to the conditions in the early cosmos. According to Dr Pfeffer, the study's lead author, the globular clusters are the inevitable result of intensive star formation in the early universe. Shortly after the Big Bang, the gas clouds in galaxies were much denser than those in today's galaxies. "These dense clouds very efficiently fuelled the formation of star clusters of up to a million stars. Some of them survived to become the globular clusters we observe today," continues Dr Kruijssen. Now the researchers look forward to using E-MOSAICS to reconstruct the formation history of galaxies based on the development of ancient star clusters, thereby gaining new insights into the formation of the Milky Way. The latest results were published in the "Monthly Notices of the Royal Astronomical Society".