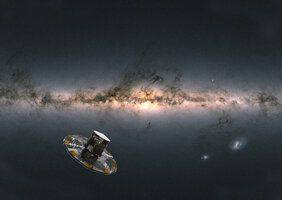 The Gaia collaboration, which is responsible for the spacecraft that is currently building the largest and most precise multi-dimensional map of our galaxy, received the 2023 Lancelot M. Berkeley New York Community Trust Prize for Meritorious Work in Astronomy. Bestowed annually since 2011 by the American Astronomical Society (AAS), the Berkeley prize includes a monetary award and an invitation to give the closing plenary lecture at the AAS winter meeting in January 2023, which in the US is called the “Super Bowl of Astronomy.”

Since its launch in 2013, the European Space Agency’s Gaia space telescope has recorded stellar positions, distances, colors, and proper motions for nearly two billion stars in our galaxy, meanwhile published as three data releases. According to the prize statement, these data releases will long be regarded as major events in the history of astronomy, triggering a global partnership to better understand the origin, structure, and destiny of our home galaxy.

The Gaia collaboration is being honored with the 2023 Berkeley prize for enabling a transformative, multidimensional map of the Milky Way, in particular for an article published in Astronomy & Astrophysics in May 2021 describing the early contents and survey properties behind the Gaia mission’s most recent data release.

A large pan-European team of expert scientists and software developers known as DPAC (Data Processing and Analysis Consortium) is responsible for the processing of Gaia's data with the final objective of producing the Gaia Catalogue. Drawing its membership from over 20 countries, the consortium brings together skills and expertise from across the continent, reflecting the international nature and cooperative spirit of ESA itself.

Scientists and engineers from more than 20 European countries are jointly working together on the Gaia mission. Germany is the largest contributor to the ESA science program. The German Space Agency (DLR) on behalf of the Federal Government supports Gaia's German contribution at the following institutes: the Astronomisches Rechen-Institut (ARI) at the Center for Astronomy of Heidelberg University, the Leibniz Institute for Astrophysics in Potsdam, the Max Planck Institute for Astronomy in Heidelberg, and the Technical University of Dresden.

In Heidelberg, a team of scientists and software engineers at the Astronomisches Rechen-Institut (ARI) of the Center for Astronomy at the University of Heidelberg (ZAH) is part of the honoured Gaia Data Reduction and Analysis Consortium (DPAC). This Heidelberg team i.a. has developed a highly complex software that monitors the correct functioning of all systems of Gaia and the quality of raw scientific data on a daily basis since the satellite was launched. The ARI team of experts and scientists also leads the Pan-European astrometry department, which ultimately extracts from trillions of measurements the data scientists need to significantly expand our knowledge about the origin and structure of our home galaxy. ARI also hosts one of six Gaia data centers, and coordinates the "Gaia Ground Based Optical Tracking", whose task is to accurately monitor the satellite's position in the sky and measure its motion at 2.5 millimeters per second as one of the manyfold prerequisites for ultra-precise astrometry.

Dr Michael Biermann, leader of the DPAC group responsible for the astrometric data reduction, comments: "We are very proud to receive this special award in recognition of the achievements of the entire Gaia team. This success is also the result of our work in Heidelberg, which did not just begin after the launch of the satellite in 2013, but in Heidelberg in particular decades earlier."

Gaia’s full third data release, which was welcomed worldwide on 13 June 2022, was accompanied by nearly 50 scientific articles by the Gaia collaboration. Reflective of the mission’s impact on the science of astronomy, this immense body of work includes the highest cited papers in all of astronomy over the past year.

“The AAS and the New York Community Trust send our gratitude and congratulations to the many hundreds of scientists, engineers, and program/technical/support personnel at the European Space Agency and far beyond for bringing this transformative mission to life. Gaia will forever remain a landmark achievement in humanity’s story of cosmic exploration,” the AAS Vice Presidents commented in a statement.

The Gaia data catalogs are produced by the Gaia Data Processing and Analysis Consortium (DPAC), a collaboration that consists of hundreds of scientists and engineers from around the world. The Berkeley Prize was accepted on behalf of the Gaia collaboration by Anthony Brown (Leiden Observatory), Chair of the DPAC Executive. H gave the prize lecture on Thursday afternoon, 12 January 2023, at the Seattle Convention Center.