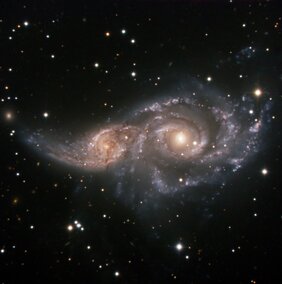 In this image, two spiral galaxies similar in looks to the Milky Way, are participating in a cosmic ballet an will once end up in a complete galactic merger to become a single, bigger one. The major merger the Milky Way has experienced 11 billion years ago probably similar to the on this image. However, the space between the individual stars in a galaxy is so vast, that virtually none of the stars in them will actually physically smash into each other. This image was captured with the ESO Faint Object Spectrograph and Camera (EFOSC2) at the 3.6-metre telescope at ESO’s La Silla Observatory in Chile. (Credit ESO) 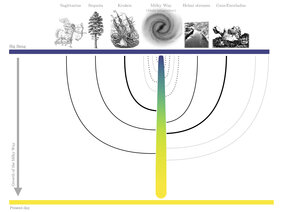 Galaxy merger tree of the Milky Way inferred by applying the insights gained from the E-MOSAICS simulations to the Galactic globular cluster population. The main progenitor of the Milky Way is denoted by the trunk of the tree, coloured by its stellar mass. Black lines indicate the five identified satellites. Grey dotted lines illustrate other mergers that the Milky Way is predicted to have experienced, but could not be linked to a specific progenitor. From left to right, the six images along the top of the figure indicate the identified progenitor galaxies: Sagittarius, Sequoia, Kraken, the Milky Way’s Main progenitor, the progenitor of the Helmi streams, and Gaia-Enceladus-Sausage. (Credits: D. Kruijssen)

Scientists have known for some time that galaxies can grow by the merging of smaller galaxies, but the ancestry of our own Milky Way galaxy has been a long-standing mystery. Now, an international team of astrophysicists lead by Dr Diederik Kruijssen at the Center for Astronomy of Heidelberg University (ZAH) and Dr Joel Pfeffer at Liverpool John Moores University has succeeded in reconstructing the first complete family tree of our home galaxy by analysing the properties of globular clusters orbiting the Milky Way with artificial intelligence. The work is published in the  Monthly Notices of the Royal Astronomical Society.

Globular clusters are dense groups of up to a million stars that are almost as old as the Universe itself. The Milky Way hosts over 150 such clusters, many of which formed in the smaller galaxies that merged to form the galaxy that we live in today. Astronomers have suspected for decades that the old ages of globular clusters would mean that they could be used as “fossils” to reconstruct the early assembly histories of galaxies. However it is only with the latest models and observations that it has become possible to realise this promise.

The team of researchers has now managed to infer the Milky Way’s merger history and reconstruct its family tree, using only its globular clusters.

To achieve this, they developed a suite of advanced computer simulations of the formation of Milky Way-like galaxies. Their simulations, called E-MOSAICS, are unique because they include a complete model for the formation, evolution, and destruction of globular clusters.

In the simulations, the researchers were able to relate the ages, chemical compositions, and orbital motions of globular clusters to the properties of the progenitor galaxies in which they formed, more than 10 billion years ago. By applying these insights to groups of globular clusters in the Milky Way, they could not only determine how many stars these progenitor galaxies contained, but also when they merged into the Milky Way.

“The main challenge of connecting the properties of globular clusters to the merger history of their host galaxy has always been that galaxy assembly is an extremely messy process, during which the orbits of the globular clusters are completely reshuffled,” Kruijssen explains.

“To make sense of the complex system that is left today, we therefore decided to use artificial intelligence. We trained an artificial neural network on the E-MOSAICS simulations to relate the globular cluster properties to the host galaxy merger history. We tested the algorithm tens of thousands of times on the simulations and were amazed at how accurately it was able to reconstruct the merger histories of the simulated galaxies, using only their globular cluster populations.”

Inspired by this success, the researchers set out to decipher the merger history of the Milky Way. To achieve this, they used groups of globular clusters that are each thought to have formed in the same progenitor galaxy based on their orbital motion. By applying the neural network to these groups of globular clusters, the researchers could not only predict the stellar masses and merger times of the progenitor galaxies to high precision, but it also revealed a previously unknown collision between the Milky Way and an enigmatic galaxy, which the researchers named “Kraken”.

“The collision with Kraken must have been the most significant merger the Milky Way ever experienced,” Kruijssen adds. “Before, it was thought that a collision with the Gaia-Enceladus-Sausage galaxy, which took place some 9 billion years ago, was the biggest collision event.

However, the merger with Kraken took place 11 billion years ago, when the Milky Way was four times less massive. As a result, the collision with Kraken must have truly transformed what the Milky Way looked like at the time.”

Taken together, these findings allowed the team of researchers to reconstruct the first complete merger tree of our Galaxy. Over the course of its history, the Milky Way cannibalised about five galaxies with more than 100 million stars, and about fifteen with at least 10 million stars. The most massive progenitor galaxies collided with the Milky Way between 6 and 11 billion years ago.

The researchers expect their predictions to stimulate future studies to search for the remains of these progenitor galaxies. “The debris of more than five progenitor galaxies has now been identified. With current and upcoming telescopes, it should be possible to find them all,” Kruijssen concludes.

Video material
Movie of one of the E-MOSAICS simulations, showing the formation of a Milky Way-like galaxy. The grey shading shows gas fragmenting, forming stars, and falling onto the central galaxy. New born stars blow bubbles into the gas with their intense radiation and supernova explosions. The globular clusters are indicated by coloured dots, where the colour indicates the chemical composition (blue clusters have a low level of elements more massive than helium, whereas red clusters have a high level of such elements). Over time, the merging of the central galaxy with smaller satellite galaxies brings in a large number of globular clusters. The ages, chemical composition, and orbits of these clusters reveal the mass of the progenitor galaxy that they originally formed in, as well as the time at which it merged with the central galaxy. Together, these enabled the family tree of the Milky Way to be deciphered. (Credits: J. Pfeffer, D. Kruijssen, R. Crain, N. Bastian). The video is available at https://www.dropbox.com/s/p35mru0f1jc9kpv/Kruijssen%2B20_simulation.mp4?dl=0.