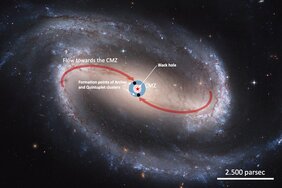 The picture shows an image of the galaxy NGC 1300 taken by the Hubble Space Telescope including a sketch of features discussed in the text. A distinctive bar of interstellar dust absorbs the light of the stars behind and points almost straight from the left and right to the nucleus, as indicated by the reddish arrows. They also indicate the direction of flow towards the centre, where clouds of interstellar gas meet the Central Molecular Zone as a kind of “iris in the eye of the storm”, the bluish circle which is not at scale. Especially at these points of impact, indicated by black dots, Mattia Sormani and his colleagues predict the formation of new star clusters, which then slowly age while revolving around the centre of a galaxy. The white bar sets a scale of 2.500 parsecs at the distance of this galaxy. (Credit: NASA, ESA, the Hubble Heritage Team, and P. Knezek, for higher resolution image see below) 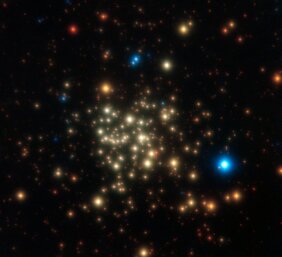 Despite its brightness the visible light from the Arches Star Cluster cannot be seen with the naked eye. Its visual is completely obscured by gigantic clouds of interstellar dust. To make the cluster visible astronomers collect light e.g. from infrared bands, as these wavelengths pass through the clouds of dust. This image of the Arches Cluster was obtained with NACO on ESO’s Very Large Telescope. The field of view is 28 arcseconds. The stars appear as bright cores surrounded by faint diffuse halos, typical of images obtained by adaptive optics instruments. According to the new results provided by the team of Dr Sormani (ITA/ZAH), this star cluster was probably born when interstellar gas crashed into the Central Molecular Zone of the Milky Way. (Credit: ESO/P. Espinoza, for higher resolution image see below)

The centre of the Milky Way resembles the eye of a storm. In its centre lurks a black hole comprising the mass of a few million suns. The eyes iris is formed by a ring of interstellar gas at a distance of ~500 light years from the black hole. Within this ring, called Central Molecular Zone (CMZ), extraordinary star formation processes are observed. Along both sides of the Galactic bar molecular gas is transported towards the CMZ, where it is transformed into stars and star clusters (see Figure). A whole suite of astrophysical processes is in action whose complex interplay can only be understood in a numerical approach.

A team of astrophysicists lead by Dr Mattia Sormani and Robin Tress from the collaborative research centre SFB 881 at the Institute of Theoretical Astrophysics (ITA) of the Centre for Astronomy of Heidelberg University (ZAH) now used cutting-edge hydrodynamical simulations to understand the gas dynamics and star formation activity in the Milky Way's Central Molecular Zone. For the first time the scientist were able to resolve structures smaller than 1 light year while retaining the larger scale flow in which the CMZ is embedded, leading to important insights into how the small scales are affected by the larger scale environment.

Supernovae push gas into the centre

Gas accreting onto supermassive black holes, such as the one that sits at the centre of the Milky Way, fuels the most powerful engines in the universe. Yet, a major unsolved question in astrophysics is how the gas is transported from the CMZ of galaxies down to the are of influence of supermassive black holes. The work of Dr. Sormani provides an important piece to solve this puzzle. He and his colleagues were able to quantify for the first time to what extent supernova explosions contributes to transporting the gas from the CMZ inwards and found that it is very significant. The inflow rate is determined to be about 0.03 solar masses per year. “Although this is considerably smaller than the inflow from the outer disc onto the CMZ, this rate is still quite significant, as at this rate the build-up of the circum-nuclear disc, the closest large reservoir of molecular gas to Sag A*, would only take a very short time”, explains Tress. At a distance of just a few light years, the circum-nuclear disc is the last pit-stop of the gas before reaching SgrA*. “It will be interesting to look at how the gas leaves the circum-nuclear disc to go towards Sag A*, something we unfortunately cannot address with this simulation, but will look into in the future”, Tress supplements.

In their simulations, the astrophysicists were for the first time able to resolve the structure within individual molecular clouds formed self-consistently from the large-scale Galactic flow. “We were surprised to see that the Molecular clouds exhibit complicated filamentary morphologies which does not resemble the idealized “spherical clouds” that are often used as a model to understand star formation”, states Dr. Sormani. “These models should be used with care if one wants to understand star formation processes.”

Using their numerical setup, the researchers also studied the temporal and spatial distribution of star formation in the CMZ. In contrast to previous interpretations, the researchers did not find that stellar feedback can drive strong oscillatory star formation cycles, at least not within the timescale of the simulation run, which covers 100 Million years. They also tested the predictions of the three main scenarios that have been put forward to explain the spatial and temporal distribution of star formation in the centre of barred galaxies, namely the “pearls on a string", the “popcorn" and the “pericentre passage" scenarios.

Star formation resembles "Popcorn and Pearls on a string scenario"

“We found that our simulations reveal a mixture of the pearls on a string and popcorn scenarios, while they are inconsistent with the pericentre passage scenario” explains Dr Sormani. In the latter, star formation is triggered when the clouds are compressed while they pass closest to the Galactic centre while orbiting in the elliptically shaped CMZ ring. This scenario is at variance with the “popcorn” and the “pearls on a string” scenario. In the “pearls on a string” scenario, star formation occurs predominantly downstream of the contact point between the dust lanes and the CMZ ring (see Figure). In the “popcorn” scenario, star formation occurs uniformly along the ring.

The astrophysicist have also studied the trajectories of newly born stars and used this to provide a detailed analysis of the origin of the famous Arches and Quintuplet star clusters, which represent the densest known star clusters in the Milky Way. They are located close to the heart of the Milky Way and are only a few million years old. These clusters are so dramatically packed with stars that on the distance between the Sun and its nearest star, Proxima Centauri, one would pass over 100,000 stars if it were in the Arches cluster! A few hundred of their stars are among the brightest ever discovered in the Milky Way. These are so bright that they will burn their fuel within a short time of a few million years and then terminate in supernova explosions. The simulation favours a scenario in which the both the Arches and Quintuplet clusters originate from gas that crashed from the dust lanes onto the CMZ, but on the opposite side of the Galactic centre (see figure and image download below).

Videos of the Simulations are available at https://www.youtube.com/channel/UCwnzfO-xLxzRDz9XsexfPoQ