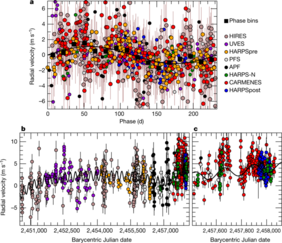 "Barnard's Star", six light-years from Earth, is the second closest star system to Earth. Nevertheless, it took 20 years until a planet could be reliably detected there. This result is based on two elaborate observational campaigns called "Red Dots" and "CARMENES", which collectively search for planets around close stars in our galactic neighborhood. The discovery has now been published in the current issue of the journal NATURE.
While "Red Dots" uses an international network of telescopes to search for planets, the CARMENES project relies on the performance of a high-precision spectrograph installed on the 3.5-meter telescope of the Calar Alto Observatory in southern Spain. Scientists from the Center for Astronomy of the University of Heidelberg (ZAH) at the Landessternwarte Königstuhl (LSW) played a key role in its development, construction and implementation at the telescope.
To discover planets astronomers make use, among other things, of the weak gravitational pull that a planet exerts on its star. Both circle around like figure skaters on ice who join hands. If one of the them is very light, then the heavier runner turns almost exactly on its own axis, but just – and this is important - a bit towards or away from the viewer.
Stars with an orbiting planet behave similar. However, they only move towards or away from the observer at the low speed of a pedestrian. This movement could be derived by the detection of a periodic shift of dark lines in the stars’ spectrum. However, the effects are so tiny that they can only be detected with high-precision measuring devices. "Thanks to its sophisticated technology and extremely high stability, CARMENES can measure these small movements," Dr. Walter Seifert commented at the commissioning of the instrument end of 2015. Seifert is astronomer at the Landessternwarte Heidelberg and responsible for the construction of the visual spectrograph of CARMENES. Prof. Dr Andreas Quirrenbach, director of the Landesternwarte and expert on the search for exoplanets, already predicted at that time that CARMENES would discover dozens of planets outside our solar system in the so-called habitable zone. The new discovery is certainly the most spectacular example.
Barnard's star was observed with CARMENES almost every night. Also involved in the data processing were Dr Yiannis Tsapras and Dr Adrian Kaminsky, who also conduct exoplanet-research at the ZAH.

The result of an elaborate analysis of the measured radial velocities was the detection of a periodic velocity change, which indicates a planet with three times the mass of earth and an orbital period of 233 days. "After a very careful analysis, we are 99% confident that the planet is there" stated the head of the international research group Ignasi Ribas of the "Institute of Space Studies of Catalonia" and "Institute of Space Sciences, CSIC (Spain)". In the end, the research team was able to use measurements with seven different instruments over a period of 20 years and a total of 771 measurement to claim the detection of "Barnard's star b", as the planet is known in astronomical jargon. Unfortunately, he orbits at an uncomfortable distance from his star and is likely to resemble a frozen world.

However, the results of the method of locating Earth-like planets are promising and at some point there is hope for the discovery of a "second earth".