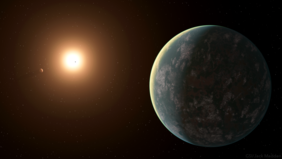 Artistic drawing of exoplanet GJ 357b. This planet orbits its star in the habitable zone enabling liquid water to exist on its surface. (Image: NASA's Goddard Space Flight Center/Chris Smith)

Analyzing signals from the planetary candidate GJ 357 b found with the TESS satellite, an international research team discovers two more planets in their archival data. One of the three newly discovered planets revolves around its star at a distance where liquid water could exist on its surface. The research results were published in "Astronomy & Astrophysics".

The research group led by Rafael Luque of the "Institute of Astrophysics of the Canary Islands (IAC)" initially wanted to detect periodic radial velocity changes of the star GJ 357, which are caused by the gravitational interaction with its planet GJ 357 b. GJ 357 is a dwarf star that has about one third of the mass of the Sun. The star located about 31 light-years away in the constellation Hydra. The researchers had evidence of the planet through a periodic darkening, which was measured by the satellite TESS. GJ 357 b is a so-called transit planet, which passes on its orbit every 4 days in front of the star, thereby blocking off parts of the starlight and thus revealing its existence. Although no life will be possible on GJ 357 b due to its small distance from the star, it is nevertheless of particular interest to astronomers. Jonas Kemmer, Ph.D. student at the Landessternwarte Königstuhl and co-author of the study, explains, "GJ 357b is a transit planet which very close to our solar system and barely larger than Earth, making it an ideal candidate for exploring the atmospheres of exoplanets."

The combination of data from various spectrographs from the past two decades has enabled astronomers to detect GJ 357 b using the radial velocity method. This also includes previously unpublished data from the CARMENES instrument, in whose construction and operation the Landessternwarte Königstuhl is decisively involved.

"To our surprise, we not only saw the signal from GJ 357 b in our data, but also two other signals that had previously gone undetected," says Kemmer. Although no transits with TESS were detected for these two signals, they are very likely two more planets. From the missing transit signals, the scientists conclude that their orbits must be slightly inclined to that of GJ 357 b. The middle planet, GJ 357 c, is at least 3 times as massive as Earth and orbits the star in 9 days.

The orbit of the outermost planet, GJ 357 d, lasts 56 days. "It receives about the same amount of radiation as Mars receives from the Sun," says co-author Diana Kossakowski of the Max Planck Institute for Astronomy in Heidelberg. If the planet has a dense atmosphere, it could bind enough heat to allow liquid water to exit on its surface. The actual size and composition of the planet are unknown. However, if the satellite is a rocky planet, it would be about one to two times the size of our planet.

CARMENES is a novel astronomical measuring instrument designed to detect earth-like planets, particularly planets near light, i.e. low-mass, stars. It is being deployed on the 3.5-metre telescope of the Calar Alto Observatory near Almería in southern Spain. The highly complex instrument consisting of two spectrographs was developed and built by an international consortium of eleven German and Spanish institutions; researchers from the Königstuhl State Observatory were significantly involved in its construction and operation. They constructed one of the two spectrographs and are now in charge of continuously monitoring and improving the quality of the data.