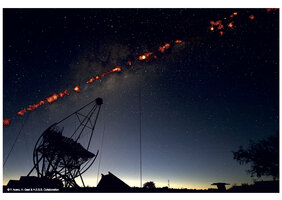 The H.E.S.S. telescopes have surveyed the Milky Way in gamma-ray light for the last 15 years. To celebrate this anniversary, the H.E.S.S. collaboration has now published its largest set of scientific results in a special issue of "Astronomy & Astrophysics". It includes the H.E.S.S. Galactic Plane Survey, studies of the populations of pulsar wind nebulae and supernova remnants, as well as the search for new object classes  such as microquasars or shocks around fast-moving stars. These studies are complemented by observations of shell-type supernova remnants and diffuse gamma emission at the centre of the Milky Way. This is a legacy data set which will serve as a benchmark until the next-generation Cherenkov Telescope Array (CTA) will start operations in the 2020s.

The Landessternwarte (LSW) as member institute of the Zentrum für Astronomie der Universität Heidelberg (ZAH) is part of the H.E.S.S. collaboration which consists of more than 260 scientists from about 40 scientific institutions and 13 different countries, i.e. Namibia and South Africa, Germany, France, the UK, Ireland, Austria, the Netherlands, Poland, Sweden, Armenia, Japan, and Australia.

LSW/ZAH host the H.E.S.S. Multiwavelength Group which organizes and coordinates observation campaigns with H.E.S.S. and observatories in other frequency bands. The currently most prominent aspects are simultaneous observations of TeV blazars with H.E.S.S. and various other observatories, and follow-up observations of unidentified TeV sources discovered by H.E.S.S. in other frequency bands. Other tasks involve the support of activities of other working groups whenever multifrequency data are needed.

Homepage of the H.E.S.S. group at LSW:

Special edition of A&A: H.E.S.S. phase-I observations of the plane of the Milky Way